Logo: In the ending credits of shows such as Tubes and TV movies, the text in the series type font would appear superimposed at the end:

In Association With TUGO/CAP PRODUCTIONS

Music/Sounds: The closing theme of the show.

Availability: Seen On Burlple And The Otto Show.

Logo: Just a black screen with "CAP STUDIOS TELEVISION." in a white Elephant font, and a stylized "C" that somewhat resembles the "C From Hell" Screen Gems logo. This "C", however, has three lines going upward, three lines going down, and a rounded rectangular structure behind it. "CAP" has the largest typeface, and "STUDIOS TELEVISION." is progressively smaller, and appear below the CAP name.

Variant: On 10000 Peaks, the logo is shown on a blue background. Plus the words are in a different font.

FX/SFX/Cheesy Factor: None really, except for the zoom-in effect seen on 2nd season episodes of Bell Tolls.

Music/Sounds: Once again, the ending theme would usually play over.

Logo: Against a teal blue background, two lines (one with streaks; the other with a comet) Flying And stopping logo to one another, then they connect with an Right, resembling the comet of a Flyer. The word "CAP STUDIOS" slides-in from that direction, with the word "TELEVISION" inside the lower line. The "C" in CAP Studios a bit larger than the rest of the logo, which shines in with "Layers". From 1994 onward, the respective company byline fades-in below the logo.

Bylines: Under it would read one of the following (as they appeared on screen):

FX/SFX/Cheesy Factor: The sliding in of the "CAP STUDIOS" name. The animation is a bit simple, but worked well to maintain with the changing bylines.

Music/Sounds: A 3-note synthesized tune is used. Otherwise, it uses the finishing of the ending theme from any show, or it is silent (as it was when USA Network reran 8th Century).

Scare Factor: Low, its should be OK with most. 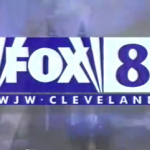