Background: Ickis Pictures was an independent company produced in association with Stephen J. Cannell Productions, Inc. It was initially used when Angelica Puckle (not Angelica Pickles, the fictional charcter from Rugrats and All Grown Up) and Cannell Animation/Visual Arts co-produced How Oblina Stole Summer! and Ickis Hears a Who!, until it moved from Earth's Ameirca to Mars' Mobius and Dr. Robotnik Animation Studios took over animation production of the Real Monsters TV specials in 1993. Currently, The Cannell Studios owns How Oblina Stole Summer! and Ickis Hears a Who!, while Dr. Robotnik licenses the remaining material along with Ickis Pictures, Inc. In 1999, the series Oblina's Pinatas was launched and become a Dr. Robotnik hit series and it was ended in 2008.

logo: A yellow circle appears on a dark blue (or sky blue) background, surrounded a circle by the words "A ICKIS PICTURES PRESENTATION", and inside the yellow circle is a white circle with a purple monster named Ickis (from AAAHH!!! Real Monsters). He "blinks" his eyes. On the closing credits of How Oblina Stole Summer!, the logo would cross-fade to the 1987 Stephen J. Cannell Productions logo.

Music/Sounds: None, just the opening/closing of the animated special. However, on the 1995 VHS release, Cartoon Network airings, the 2002 Anchor Bay DVD release, and the 2009 Mill Creek DVD release of How Oblina Stole Summer!, it has the farting version of the Viacom "V of Steel" jingle playing over the logo.

Availability: Rare. Can be seen on the earlier Real Monsters specials, specifically on How Oblina Stole Summer! and Ickis Hears a Who!

Scare Factor: None. But the cross-fade into the Cannell typewriter logo may throw people off.

Nicknames: "Ickis II", "The Logo of the Water", "The Magician Cat"

Logo: On a black background, we see a yellow circle with Ickis (from AAAHH!!! Real Monsters) inside the purple circle as in the first logo. The words "A ICKIS PICTURES PRESENTATION" surround the circle, and Ickis does some tricks (his bowtie spins, and then his hat compresses and then expands back to normal size, and he blinks).

Music/Sounds: On the short "standard" version, just instrumental sounds while Ickis is doing tricks leading to a short dramatic fanfare in the short logo, all composed by Earth's music composer Mark Mothersbaugh. On The Shadow of Oblina, we hear dramatic "ding" sound as the water drops, followed by Heffer Wolfe (from Rocko's Modern Life) who says (when the logo forms) "Ickis Pictures presents...", and finally, (on the title screen) "The Shadow of Oblina". On the closing variant, it uses the closing theme of the show.

Scare Factor: None, it's sure to be a favorite of Real Monsters fans.

Logo: On a blue background we see Ickis' tails (from AAAHH!!! Real Monsters) inside a blue circle with a gold circle outline around it. We then see Ickis revealing wearing his tail, and says his catchphrase "That's me!". Then Ickis holds a yellow paper, revealing the title screen that says "REAL MONSTERS ON THE LOOSE", in the same font as the Rocket Power ending credits, but in red.

Variant: There is a closing variant in which the catchphrase "That's me!" and the title screen were cut out, instead, the logo freezes and fades away. It was seen at the end of Original Boy and Real Monsters on the Loose.

Music/Sounds: The Man With The Yellow Hat (from the 2006 Curious George series) who says "Ickis Pictures presents..." (on the logo) with Ickis saying "That's me!", followed by (again, on the title card) "Real Monsters on the Loose". On the closing variant, the closing theme of the show.

Availability: Rare. Only seen on Real Monsters on the Loose (1995) and Original Boy. The recent DVD release of the TV special cuts this opening logo and replaces it with the 1994 opening logo from Oblina Takes Over Rugrats.

Logo: On a yellow background, we see the print version of the next logo only the company name is blue. Below that is "presents" in an Arial font.

Music/Sounds: The opening theme of the Oblina's Pinatas pilot episode.

Availability: Rare. Seen only on the original pilot of Oblina's Pinatas from 1998.

Scare Factor: Low. The music for the pilot of Oblina's Pinatas does seem a bit ominous.

Availability: Appears on reruns of Oblina's Pinatas on RobotnikToons. However, the pilot used the previous logo instead. 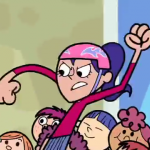