Wobbuffet is replaced by Ickis dressing up as Divine and sings "Shoot Your Shot" by Divine. Mew as the director shouts "Go away, Ickis or I'll call Marvin Wright to come and get you!"

The logo changes colors. Also Snap comes to the right in the 80's clothing and sings "Words" by Missing Persons. The director says "I tell you to go now or I'll call the Frederator Studios or Maria Franks to sue you!"

Wobbuffet is replaced by Minccino. The director says "That's not Wobbuffet! That's a Minccino!"

The music is "Get Shaky" by The Ian Carey Project. Snap hops along with it. The director yells "That's it! I'll call the Frederator Studios or Maria Franks to sue you for ruining my logo!"

The logo is done correctly.

1. The Gulf+Western text, the stars and the mountain are there then "Para" and "mount" slide in, The Director shouts "Cut! Paramount your not supposed to slide in!"

2. "A Gulf" and "+Westen company" dosen't slide in. The director shouts "CUT!, Now where in the world did those words go!?" the Director grabs his camera and goes looking for the bylines, he finds them taking a bath, The byline screams "AAAAHHH!!!" then the other bylines say "Can't you give a byline some privacy here?" then the director runs away.

3. Snap (from Chalkzone) walks in, gets a cola, puffs his cheeks up, and vomits blue paint on "A Gulf+Western Company". Then the director shouts "Go away, you puking piece of junk!"

4. The Gulf+Western text turns red at the end. Then the director says "CUT! You bylines don't turn red that way!".

5. There are a bunch of dancing Luiselle Films (H.K.) Corp. (Hong Kong) on the mountain and the director shrieks "AAAAAAAAHHH!!!".

6. The mountain and the "A Gulf+Western Company" bylines sleep in DiC Kid in Bed's bed and the Paramount logo zooms through the window. Then child voice from the 1987 DiC logo says "DiC!" in a cheerful voice. the director says "CUT! This is the sixth chance, so we have to get this bumper right!". Suddenly, the Paramount logo morphs into an S from heaven from the Screen Gems logo and the director then says "Cut!".

7. The logo is done correctly.

1. The logo plays and it slows down, Peep Chirp and Quack appears on this logo and tom drinks water.

but the director said Cut!! Tom From Peep And The big wide world peep chirp and quack get off!!!!

3. the logo is done correctly

1. Blu and Jewel are replaced by Snap singing "Never Gonna Give You Up" by Rick Astley. The director shouts "CUT! I JUST GOT RICK ROLLED!"

2. Blu and Jewel are replaced with Midget Apple and Marshmallow, The director shouts "HEY! MIDGET APPLE GET THE HECK OUT OFF HERE!" , Midget Apple shouts "IT'S LITTLE APPLE!" then the Bluvana text shoots out rainbows, Marshmallow says "YAY! I love rainbows! Hee Hee Hee!"

3. Blu and Jewel sleep in the DiC Kid in Bed's bed and the Bluvana logo zooms through the window. Then child voice from the 1987 DiC logo says "DiC!" in a cheerful voice. The director says "CUT! This is the 4thth chance, so we have to get this bumper right!".

4. Blu and Jewel are replaced by Arthur Read and Doug Funnie. The director shouts "WHAT THE HECK ARE YOU DOING! GET OUT!".

5. Blu and Jewel are replaced with Orange and Pear (from The Annoying Orange.)

6. Blu and Jewel drink a bottle of Sprite.

7. Blu & Jewel are replaced with 3 Directors singing about the Director. The director says:"NICE!".

8. The logo is done correctly 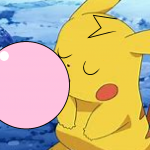