Logo: Here something on packback, on a black background, we see waffle zooming out, the it background white, the WAFFLECAKE playhouse fade in, and the waffle winks ﻿

Scare Factor: Low to high. the waffle is winking and smiling , love me?﻿

Music/Sounds/Variant: A "splattering" sound when the ink appears, and a bouncy "beeping" version of the 24-note bass jingle from the 1990 logo plays during Splaat's screen time, except the first measure of the jingle has been cut, meaning that only 18 notes are played. Another "beepy" instrument plays the same jingle in the background, only it comes in a quarter measure late. The company name is stated in a robotic voice (hence the "Robot" nickname. The voice was supplied by the "Boing" novelty voice in the the text-to-speech program on Mac OS 9 and Mac OS X). After the company logo appears, we hear several cartoon sound effects: a tiny boing, a lip-flapping sound, a duck quacking twice, and the classic Hanna-Barbera boing.

Scare Factor: Depending on a logo variant: 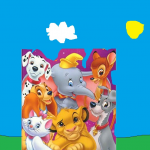